Lois M. Collins looks at the future of caregiving as more and more people age without strong family support. Collins is a reporter and columnist for the Deseret News in Salt Lake City, UT. She wrote this article while she was a Journalists in Aging Fellow, sponsored by the Silver Century Foundation as part of a fellowship program created by New American Media (NAM) and the Gerontological Society of America. The article was printed in the Deseret News, then posted at NAM’s website on December 1, 2016. It’s reprinted here with permission.

Family members already form an invisible work force that cares for America’s frail elders. But changes in policy and family structure—from later-life divorce to smaller families—suggest that friends and extended family will play even more important roles as caregivers in coming years.

Eighteen million Americans already care regularly for a fragile older relative, most often a spouse or a parent, and the number is expected to at least double by 2050.

Meanwhile, aging baby boomers have relatively fewer children than previous generations, creating what Richard Schulz, director of the University Center for Social and Urban Research and associate director of the Aging Institute at the University of Pittsburgh, calls a “looming gap between what’s needed and its availability.”

Those most in need of help are individuals with dementia or who have difficulties taking care of their own basic needs, from dressing and bathing to preparing their own food and managing their medications and finances, among other daily tasks.

The Gap in Elder Care

That gap will likely widen further because fewer Americans are marrying, couples who don’t marry are less apt to see themselves in caregiving roles for each other and divorce among older couples has been on the rise. So caregiving networks increasingly include what some gerontology experts call “chosen kin” and “collateral kin,” umbrella [terms] that include friends, neighbors and more distant relatives, like nieces and nephews or in-laws.

That shifting landscape of caregiving was a major topic during the 2016 annual meeting of the Gerontological Society of America …. Experts say not only are family and friends tapped to provide a large portion of the care frail older people need, but they’re also tasked to provide more complicated care.

The impact on caregivers can include more stress, financial pressure and health-related problems of their own.

Today’s caregivers are taking on tasks once handled only by doctors and nurses, though they get little training.

Rita Choula’s caregiving story from Charleston, SC, is fairly typical. The senior adviser to the AARP Public Policy Institute described watching her mom care for her own parents: “It’s what we do. We don’t put our folks into homes.”

Then it was Choula’s turn to juggle caregiving and career and marriage and family. She remembers shopping trips with baby supplies on one side of the cart and adult diapers on the other. Eventually, her mom’s needs were beyond her capacity and she had to put her into long term care. “I think I was more upset than she was,” Choula said.

About half of family caregivers are in the work force, as Choula was, juggling sometimes competing responsibilities. They have little training in adult care despite the fact they often undertake tasks once solely the realm of skilled professionals such as doctors and nurses, according to Schulz.

Because family caregivers typically fall into the role without learning a right or wrong way to provide care, “they have little confidence in their own know-how to get the job done,” said Jennifer L. Wolff, a gerontologist, researcher and associate professor of health policy and management at the Johns Hopkins University Bloomberg School of Public Health.

Such caregivers are “at greater risk for burnout, depression and not being able to care for themselves,” Wolff stated.

To further complicate things, because of health privacy and security rules, those caregivers are among the “least likely [to be] able to get the information they need to coordinate and manage care” for their frail or ailing relatives or friends, she said.

Several experts at the conference emphasized the need for individuals, while healthy, to make sure they’ve completed paper work to name trusted people to speak for them medically—and just as importantly, to receive information about their care should need arise.

Caregivers need support, including training, and must be incorporated into the formal care team—usually made up of professionals, including doctors and home health providers, among others. They are “a critical and active member,” said Rani Snyder, program director of the John A. Hartford Foundation, which focuses on improving care for older adults.

“Caregivers are the linchpin of long term care,” she said, “the person who holds together critical elements of another person’s life.”

As people live longer, more live alone. They are also more likely to develop disabling conditions that require more everyday care. “It’s a major question who will provide that care,” said Jacquelyn Benson of the University of Missouri. She noted, “Divorce and remarriage may weaken adult children’s sense of obligation.”

Nor is it clear who will care for the growing number of single men and women. About 65 percent of people age 85 to 89 need help. Of those 90 and older, only 25 percent do not need assistance, said Rosemary Blieszner, associate dean of Virginia Tech’s graduate school.

If one expands the number of caregivers to include the so-called “chosen kin” or “collateral kin,” who provide different types of help to older Americans, caregiver numbers jump to 34 million plus.

Chosen kin include friends and neighbors, while collateral kin are relatives like siblings and nieces and nephews. Most of those helpers don’t provide the same level of assistance as spouses and children, whom Jyoti “Tina” Savla, assistant professor of human development at Virginia Tech’s Center for Gerontology, called the “first safety net” for frail elders.

Friend caregivers are typically younger than the person they assist, are most apt to be female (also true of family caregivers), and often are highly educated, single and without minor children. Often, the individual they assist does have children, said Tracey LaPierre, a University of Kansas sociologist.

Pals are more likely to take an old friend grocery shopping or to the doctor than to provide personal care, although that may change alongside demographic shifts. Their help consists largely of providing transportation, assistance with household tasks, and companionship. Blieszner notes that “chosen kin are often preferred over family” by the individual receiving care. Adult children and aging parents don’t always get along.

Friends typically are unpaid and, unlike family caregivers, seldom live with the person they assist. Nearly one in five chosen kin provide some care for more than 10 years.

Also, friends play a significant role for LGBT adults who need care, Blieszner said. In a survey, LaPierre said, care recipients rated … their relationship quality [higher] with friends who helped than with … others. The friends agreed: “Eighty percent reported no financial, emotional or physical difficulties from caregiving,” she said. 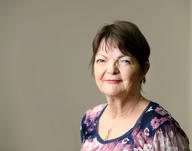 As a reporter and columnist for the Desert News in Salt Lake City, Utah, Lois M. Collins currently covers family issues, but in the past she has written about everything from health and technology to religion. Collins has won many national, regional and local writing awards but says she’s most proud of the fact that she once stepped out of an airplane in midair for the sake of a story.

What’s Behind my Mother’s Obsession with Food?

Eating is a way to connect with personal memories, but as people age, our need for familiar tastes may also become a lifestyle limitation.

Stalked by the Fear that Dementia is Stalking You

When Alzheimer’s and other dementias run in the family, how do you cope with the (very normal) worry that you might also succumb to memory loss?

Social Security: Where Do the 2020 Candidates Stand?

This detailed analysis could help you make an important decision when you vote in the primary election.