In 2014, Sharon Kassakian, 75, was diagnosed with macular degeneration in one eye. But the condition was manageable, and she felt confident enough to move to Portland in late 2016 to be closer to family. Then, in 2018, her vision began to deteriorate. She started having difficulty seeing with her other eye.

Three years later, Kassakian’s eyesight remains very unstable—OK one day, not so good the next. Doctors can’t promise she won’t eventually lose her sight entirely. The diagnosis was emotionally devastating, Kassakian said, similar to her earlier experiences in life when family members died.

“You’re losing something that you’ve had your whole life,” she said. “I wake up every morning with fear. Will it be the same, worse or better?”

More and more older adults will face similar challenges in the coming years. According to the National Eye Institute, about one-third of Americans over 65 are living with some form of “vision-reducing eye disease.” As the population ages, that number will increase, making vision loss a serious, public health issue.

“This year, the oldest baby boomers are turning 75, when age-related vision loss really kicks in,” said Ed Haines, chief program officer for the Hadley Institute, a Chicago-area nonprofit supporting people with blindness or vision loss. “We have a looming epidemic that no one has planned for, and we don’t have an infrastructure to deal with it.”

What Can Be Done?

The leading causes of blindness and low vision in the United States are age-related eye conditions—macular degeneration, cataracts, diabetic retinopathy and glaucoma—and the numbers are on the rise. Cases of macular degeneration, for example, are expected to climb to 17.8 million by 2050 among those 50 and older, according to the Centers for Disease Control and Prevention. Cases of diabetic retinopathy are expected to quadruple by 2050.

“It’s a big loss of independence,” said Neva Fairchild, national aging and vision loss specialist for the American Foundation for the Blind. “Things you were able to do before —read your mail, pay your bills, watch TV, cook meals—they’re all taken away, at least until [you] have some accommodations in place.”

Many aging-related eye diseases can be controlled with treatment—if caught early. In addition, vision loss can often be managed with assistive devices, such as corrective lenses or magnifying devices, and occupational therapy that helps people learn techniques to adapt and maintain independence. But Medicare doesn’t always cover the cost of eye exams or assistive devices, and doctors often don’t have the time or knowledge to refer patients to therapists.

Tech and training can help, but many doctors don’t even know they exist.

“Historically, in this country, visual rehabilitation did not evolve under the medical model, therefore it’s typically not covered by Medicare or private insurance companies,” said Haines. “If you break a hip, a discharge planner makes appointments with a physical therapist and a plan for getting back on your feet. When you get a diagnosis of irreparable vision loss, it’s devastating, yet you’re sent home with nothing.”

The key is to connect patients with the right technology and the right training, but often, patients and even doctors don’t know that exists.

If caught early, many causes of aging-related vision loss, including glaucoma and cataracts, can be treated before they cause significant damage.

“In general, if they’re treated early enough—with medicines, surgeries, laser treatments and regular follow-ups—the vast majority of patients don’t lose vision from a functional standpoint to the point where it severely limits their daily activities,” said Donald Abrams, MD, ophthalmologist-in-chief and director of the Krieger Eye Institute at LifeBridge Health in Maryland. “The sooner we treat it, the better off you’ll be.”

The best way to protect your vision is to have regular eye exams.

A patient’s best defense: regular eye exams beginning at age 50. Black and Hispanic people, who are more prone to many age-related eye conditions, and those with a family history of eye disease, should start annual exams at age 40. A comprehensive eye exam should include a test of eye pressure as well as dilation of the pupils. (Not all optometrists perform all of these diagnostics. Ask first.) A thorough eye exam can detect genetic conditions or abnormalities in the eye that may indicate a need for more surveillance. Medicare pays for comprehensive eye exams for some patients with diabetes or those with increased risk for glaucoma due to ethnicity or family history.

Prevention is also key. Good health habits will reduce the likelihood of losing one’s vision—exercising, eating a balanced diet including dark leafy greens and fish high in omega-3 fatty acids, avoiding smoking, wearing sunglasses and a brimmed hat outdoors, and management of other health conditions like diabetes. Doctors may also recommend vitamin supplements (usually a combination of antioxidants, carotenoids and omega-3 fatty acids) for people with signs of macular degeneration.

Elise Franz, 67, (not her real name) was a successful graphic designer and freelance writer for art magazines until six years ago, when she had cataract surgery. Instead of improving her eyesight, the surgery seemed to trigger a cascade of other problems, including macular edema, diabetic retinopathy, glaucoma and optic nerve damage.

Once a frequent traveler who’d jet off to Paris on a whim, now Franz rarely leaves her home except to go to the doctor.  She once churned out articles easily, getting lost in the flow; now the writing process is tortuously slow. She positions her face right next to the computer and uses extra-large type.

“Everything is problematic,” she said. “And people don’t understand. I’ll go to the doctor’s office, and they’ll hand me a pile of paperwork. I tell them, ‘I can’t read that.’ They hand it to me anyway.”

Franz was recently diagnosed with heart issues too, which she thinks resulted from her inactivity due to her vision loss.

“I used to love to exercise, to go swimming,” she said. “Now, it’s hard to do everything. The fact that I can’t see has had deleterious effects on my physical health. It’s not like I can go out my front door and go for a walk.”

As Franz’s story shows, older adults with vision loss often suffer more than a loss of the ability to enjoy favorite activities. Vision loss can exacerbate other health problems and lead to emotional and psychological challenges. With a diagnosis of macular degeneration, for example, “Your perception of yourself, and vision of your future, is thrown into total disarray; you despairingly imagine a life of darkness, social isolation, dependency, risky treatments, loss of friends, hobbies, participation in activities of interest such as sports, theater, art and reading—in short, a kind of early death,” wrote psychiatrist Arnold Wyse, MD.

Older adults who are visually impaired often become isolated. Everyday activities, like attending worship services or eating a meal at a restaurant with friends, become problematic.

“People with vision loss often become paranoid about eating out,” Haines said. “They don’t want to drop food or spill it on themselves. Navigating a buffet is a nightmare. You’re unable to see when people are waving at you. That’s a big deal when I’ve worked with folks in small towns because everybody waves. And if you don’t wave back, if the person who waved doesn’t know you have a vision impairment, they feel they’ve been insulted.”

Haines added that the Hadley Institute typically gets a surge of inquiries after the holidays from families who notice a decrease in a loved one’s vision during a visit. Often, fearing for the elder’s safety, families will rush to move the person into assisted living, without taking the time to learn about other options to allow the elder to remain independent.

Help from Tech and Training

Older adults can tap into resources that help them adjust and function—if they know where to look. The federal government maintains the Older Individuals Who Are Blind Technical Assistance Center, a clearinghouse of agencies serving older adults with vision loss.

Many digital devices are helpful for people with vision loss. Virtual assistants, like Amazon’s Alexa, can provide information (time, weather forecast, sports scores, even make phone calls) in response to voice requests. Some devices can be operated via speech commands, although there’s a learning curve to adapt to that.

“Apple did the visually impaired community a huge favor,” Haines said. “Every Apple device can be accessed with speech commands. If you lose your vision, you don’t have to throw out your iPad. We’ve had individuals in their 90s learn how to do this.”

Because of Apple’s success with speech access, Haines added, other platforms like Android are adding similar features.

However, technology isn’t the only fix, Haines cautions. Adapting the home environment and learning how to perform daily tasks with reduced or no vision are often even more helpful. The Hadley Institute offers an extensive catalogue of online, distance-learning workshops, all free, that teach people how to adapt tasks of daily living for reduced vision.

For example, a short video demonstrates how to pour liquids into a cup, using simple techniques like squaring oneself up next to the counter, adding task lighting and placing the cup on a tray of a contrasting color, making it easier to see and easier to clean up spills. (View a short sample here.) The workshops can be ordered by mail in other formats too: large print, digital talking book audio, or braille.

Occupational therapists can also help patients with vision loss. They visit patients’ homes to coach them on ways to safely manage their activities of daily living, including bathing, toileting, cooking and cleaning. They also may recommend adjustments in the home environment, customized to the person’s needs and type of vision problem, like adding task lighting in key spots or installing drapes to block glare.

After connecting with a variety of resources, Kassakian feels more hopeful now.

She worked with a therapist who helped her with the grieving process that came with the loss of vision. She found a nonprofit ride service that takes her to doctors’ appointments. She discovered Hadley’s free online workshops. She joined two support groups, both offered via Zoom—one by Hadley for emotional support, another for sharing tech tips. At the latter, she learned how to use the accessibility features on her iPhone.

“I have blind friends now, and I’m just amazed at how they sometimes function even better than I do,” she said. “There is a grieving process, but you can learn to live with vision loss because there are so many services and resources.  Now I know where to turn for support.” 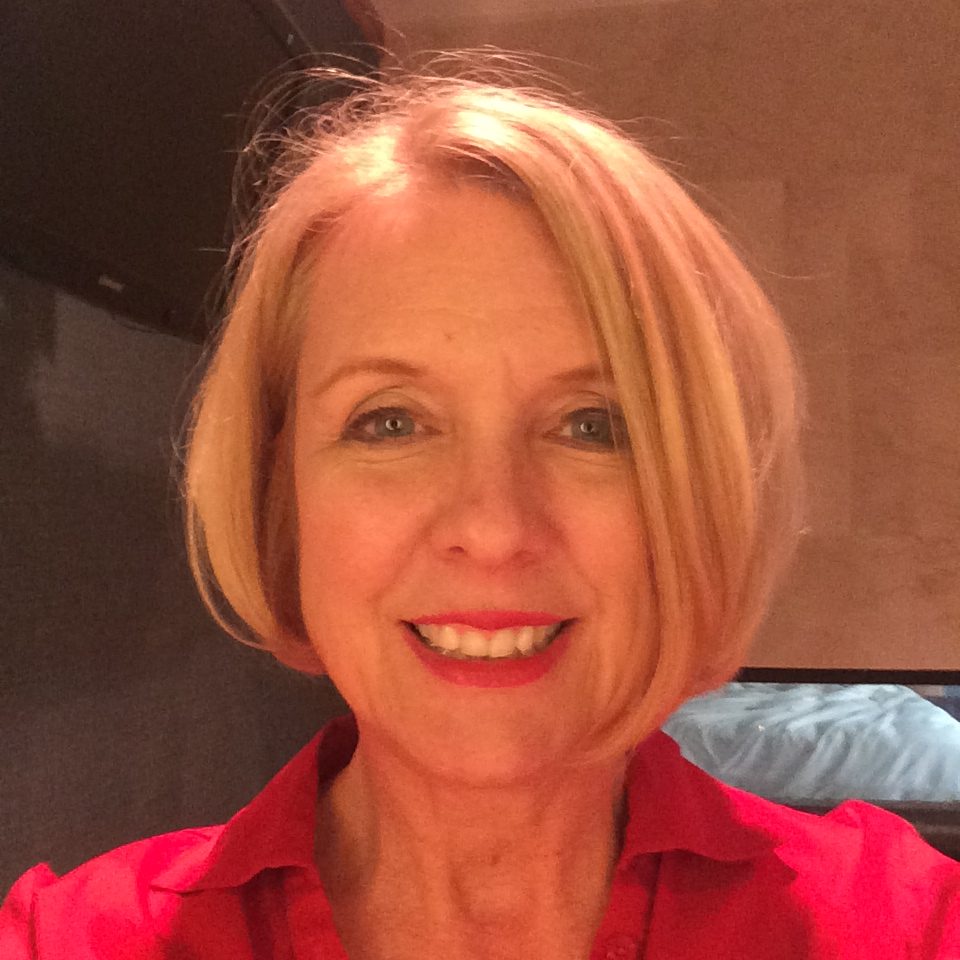