See our photo gallery below for more of Elaine Zelker’s portraits of hands.

Thelma is 97. “Did you know I used to be a bartender?” she asks photographer Elaine Zelker. “I was,” Thelma says proudly.

“No one really knows that about me,” Thelma confides. “My husband and I owned a lovely little hotel here in town and I was the barkeep.”

Zelker listens to Thelma tell stories about her life. She wants to find out what’s important to Thelma before photographing her.

“I did more than keep the bar, though. I helped run the place. It was ours. He was my partner. After a few years we lost the bar and moved on, times were tough, and I wound up in a sewing factory for the rest of my life, sewing clothes and linens. Everything changed. I retired about 30 years ago. I lost my husband. But, being a bartender was it for me, the job I will never forget. It was the only job where I could be myself. Where I could sit and laugh with patrons and listen to their stories. And they would listen to mine. It was the only job where I felt appreciated.”

Zelker believes our hands show the journey of our lives. Every wrinkle, arthritic joint and age spot we earn gives clues to our labor and leisure over a lifetime.

Appreciated is what Zelker wants Thelma to feel at 97. She asks Thelma to choose an object that “represents” her, something that signifies the essence of her life’s journey. Thelma will hold the object while Zelker composes a portrait of Thelma’s 97-year-old hands. Why her hands? Because Zelker believes our hands show the journey of our lives. Every wrinkle, arthritic joint and age spot we earn gives clues to our labor and leisure over a lifetime.

Not simply her drink of choice (gin, never vodka), it is a vital connection to Thelma’s former identity and life that privately reverberates for her into the present. When Thelma’s family hears this story, they are stunned. They’d had no inkling of her previous life.

The framed portrait graced a spot of honor above Thelma’s bed until her death the following year. It was one of the last photographs ever taken of her, a cherished memento to her family. 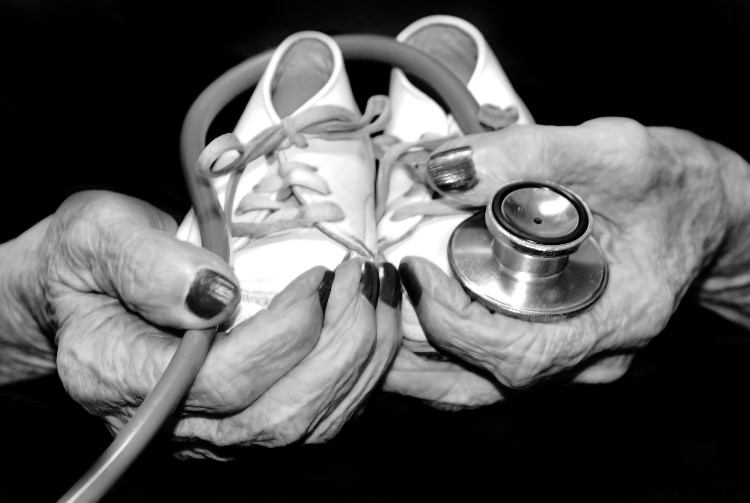 Since Thelma’s portrait, Zelker has taken dozens more, spawning an ongoing series she calls the Hands project. Not all of Zelker’s subjects have a terminal illness like Thelma, but all are over 65. In fact, most are more than twice Zelker’s age—in their 80s and 90s.

To Zelker, the older the better.

She goes to nursing homes, assisted living facilities, and the houses of friends’ grandparents to shoot. She sits with each person beforehand, just as she did with Thelma, and listens. She asks each person to choose a significant object to hold for the portrait. Not surprisingly, picking the object is sometimes difficult. She gives participants a hug when she leaves and keeps in close contact with many, long after she delivers their own personal print.

Zelker photographs older people for her Hands project because she believes that too many older people are left alone and have no one to share their stories with, no one to listen to them, day after day. She saw as much when she worked as a full-time nurse: people sitting quietly in wheelchairs for hours with no one to talk to. She does the math: six floors, four wings, and 680 beds in Thelma’s facility alone.

“It’s harder than you might think to get people to participate initially,” Zelker says. “They want to know why I am doing it, but it’s more for them than for me.” Once they start talking, however, “the excitement of just hanging out and chatting with a stranger about their lives is enough to make them feel worthy.” And when they see the portrait, they are grateful, sometimes overwhelmed. One woman burst into tears and said, “You’ve captured my whole life in one picture!”

But it’s the process of “capturing” that life that matters to Zelker. The intimacy, compassion and respect that inform her process translates into expressiveness, openness and grace in the images.

We all are important, and each and every one of us has a story to tell.

Some of the Hands photos have been displayed in art galleries and on hospital walls. Family members order prints for their own homes and call Zelker when their loved one passes away. Zelker hopes to compile the images and stories into a book to share with a wider audience.

When asked what she wants a wider audience to see in the portraits, Zelker says: “I want people to know they are not invincible. We all are important, and each and every one of us has a story to tell. I want younger people to look at a picture and say, ‘Hey, that reminds me of my grandma. I should sit with her and ask her about her life.’ I lost both of my parents at a young age, and I’d do anything to hear their voices and stories one more time. I’d give anything to just sit and hold their hands.”

Zelker grew up with a father who was 20 years older than her mother. Her father was roughly the age of most of her friends’ grandparents. When she was a teenager, her parents took her to visit their friends, most of whom were retired. “I spent my Thursdays playing bingo with my parents at church,” Zelker says. “In the beginning I was forced to go along, forced to listen to their reminiscing. But soon I began to enjoy going, I enjoyed learning how to sew or crochet, I enjoyed hearing stories about the war.”

When her mother was dying, hospice played a vital role in the last 10 days of her life. Although Zelker was trained as a nurse, she needed to be the grieving daughter, not the professional caregiver. After her mom passed away, she talked to the hospice team, wanting to learn how to do what they did. Eventually, she worked in the hospice field. “It was the most humbling job of my life,” she says. “I wanted to sit with everyone who was dying and just hold their hand as they crossed over to the other side.”

Victoria Robinson, a full-time journalist and part-time poet, writes about aging from the perspective of the arts, media portrayals, global culture and social justice concerns. She lives in Brooklyn, NY, where she is working on a documentary about her 76-year-old neighbor, Miss Margie. Photo by Walter Glass.