At 55 years old, Heidi Christensen relishes the chance to defy stereotypes. “You didn’t just get passed by an old person,” she says of the 20- and 30-somethings she zooms by on bike paths. “You got passed by an old lady.”

Almost three decades ago, chances didn’t look good that she’d be passing anyone while bicycling—or running or swimming—ever again. This, despite the fact that she was a professional triathlete who, at age 28, had just come in fifth at the Ironman World Championships.

The problem was, not long after that triathlon triumph, the leg weakness and pain that Christensen had been experiencing for some time intensified to the point that her legs “basically stopped working,” at least at a competitive level. Yet doctors couldn’t figure out what was wrong.

So, at the peak of her career, Christensen faced the agonizing reality many professional and recreational athletes confront around their 30s, 40s or 50s: she could no longer compete in the sport she loved. “It was a hard adjustment,” she says, “a very hard adjustment.”

Christensen quit triathlons and went on with her life, but the pull of athletics never left. Before too long, she found a related sport—and excelled in a way she’d never expected.

For both professional athletes and weekend warriors, athletic performance declines with age. Stamina, power or simply the time to train lessens, or injury or illness makes competing impossible.

Since athletes often shape their lives and even identities around their sports, the what’s-next period can be depressing and confusing. Some quit physical activity altogether. But others are eventually able to find athletic fulfillment in new ways. They discover a different sport, change their level of competition or feed their soul through recreational exercise.

Older athletes and experts echo similar advice for making a transition like this: stay positive and think outside the box. 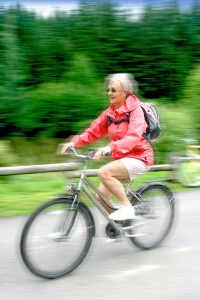 Tip 1: If You Have to Quit, Experiment

In some sports, older athletes can continue participating, just at lower levels of competition. But that’s usually not the case with explosive or high-impact sports like football, basketball and hockey.

As you get older, your jumping ability and explosive power decrease, says J. D. DeFreese, PhD, program manager of the Brain and Body Health Program at the University of North Carolina’s Center for the Study of Retired Athletes.

Decreasing bone density and flexibility make injuries more likely, and recovery becomes more difficult with age. In addition, your ability to compete could be impacted by old injuries that tend to linger from high-impact activities, DeFreese says.

Most professional athletes in sports such as these retire young, but even recreational players must usually give up the game.

When you have to quit a sport, “you lose a part of yourself,” says Doug Gardner, EdD, coordinator of mental training services with the NFL Players Association and founder of ThinkSport Consulting Services in California.

“It’s not just a loss, it’s a loss of a sense of purpose”—including purpose for working out since that’s been tied to the sport, Gardner explains.

To regain excitement for physical activity, Gardner recommends brainstorming other activities you’ve enjoyed or want to try and training for those. Experiment to see if you can get the same level of satisfaction from them.

After all, as people grow older, we engage in sports not as much for external rewards like getting a scholarship or making it to the pros but “because we want to grow as a person and we want to challenge ourselves,” he says. “It’s about the participation; it’s about the work; it’s about improvement.”

Tip 2: Try a New Outlet for Your Skills

In 1987, after playing in the NFL for 13 years, mostly with the Buffalo Bills, Freeman retired because his body was just worn out. “I knew it was time to walk away before something major happened,” he says.

But Freeman kept right on training because he knew what he wanted to do next: be an NFL referee.

You can play some sports from the cradle to the grave. With others, you have to compromise.

During games, “you’re running anywhere from three to five miles,” Freeman says. “I’m running up and down the field with 20-year-olds, so I have to keep my body in shape.”

Freeman, who has torn biceps and rotator cuffs and has had a number of surgeries—all, after retiring from football—maintains a rigorous training regimen and stretches every day. “If you can’t keep up with [flexibility] it’ll leave you in a hurry,” he says.

He also uses his own hyperbaric oxygen chamber, a large machine that he notes many athletes use for recovery. It pumps pure oxygen into a pressurized environment. “I pretty much stay in it five to six hours a week,” he says. The increased oxygen helps tissues heal. “It’s taken away all the soreness that I ever had. All the joint pain—everything.”

Some sports, such as tennis, swimming and golf, offer athletes a longer lifespan than others, allowing people to transition within the sport rather than leave. They might continue at a less competitive level or simply move up in age category.

Fencing is one of those “cradle-to-grave” sports, says Donald Anthony, a former Team USA fencer who’s now board president of the United States Fencing Association.

Older athletes have some advantages. For one thing, they listen to their bodies.

Fencing has various age classifications—the highest being 70 and older. Anthony, who’s 56, won the US national championship in his category last year.

Though he hasn’t had to leave his sport, he has noticed his abilities change. Being a married, working professional leaves less time to train, so he’s learned to maximize his strength-and-conditioning time.

But then there’s the knee arthritis. “When I was younger I used to have an extremely long, very powerful lunge,” says Anthony, who’s also the founder of the fencing-promotion company SwordSport. Arthritis precludes such a lunge today. So he made adjustments. To attack an opponent, Anthony now uses other quick footwork to close the distance and finishes with a shorter lunge.

“That’s where I think the advantage of being an older athlete is. We listen to our bodies more,” he says, “and we have that level of experience or wisdom where we can develop ways of still being highly effective without necessarily having to focus on one area of physicality.” 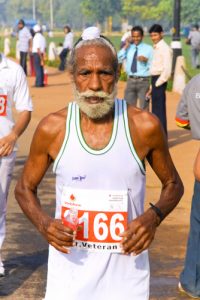 Whether you stick with your sport or find a new one, it’s all for naught if you get sidelined by a bad injury.

Many times, people do push themselves to that point, says Jim Thornton, president of the National Athletic Trainers’ Association. “They’re still 18, 19 in their minds, and their bodies aren’t.”

To prevent injury, Thornton recommends keeping up your “muscular prowess” (perhaps through something like Pilates), warming up before competing and engaging in a daily stretching and dynamic warm-up routine. “Maintain that range of motion in all of the joints, from your ankles all the way up to the top of your noggin,” he says.

And listen to your body. Pain that lasts more than two days or that doesn’t get better means “you’re hurting yourself, and you need to see your doctor,” he says. “Exercise and movement should improve your health, not affect it negatively.”

However, DeFreese, of the Center for the Study of Retired Athletes, notes that minor pain doesn’t always mean you have to stop your sport. In fact, being sedentary could make things worse. Your doctor may recommend physical or occupational therapy instead.

When seeking out therapists and doctors, Anthony says it’s helpful if you can find someone who knows the sport. He has access to the USA Fencing team’s physical therapists and works with an orthopedic physician who’s well versed in fencing.

Finally, before starting a new sport, Thornton recommends seeing a doctor for a preparticipation physical exam, to make sure your body—including your joints and heart—is ready to go.

Tip 5: Take Care of Yourself Mentally

If, despite these tips, you’re having trouble mentally or emotionally during this time of change, you’re not alone. “Transitions are perfectly normal parts of life,” DeFreese says, “but it’s normal for them to cause stress.”

At age 45, Gardner, a sports psychology consultant, is facing such a transition himself. He plays hockey for fun as a goalie but isn’t sure how much longer he wants to put his body through those paces.

He believes athletes who compete recreationally sometimes feel the loss even more profoundly than professionals. For them, “it isn’t about the termination of a career. It’s about the ability to do something that brings them pleasure and enjoyment as a lifelong activity,” he says. “They’re not doing this for all of those extrinsic rewards—money, fame, glory. They’re doing this for pure love.”

Plus, “for so many people participation is about being a part of a group,” Gardner says. Once the sport is gone, that social network may be lost as well.

So surround yourself with a supportive group of friends and family if you can. And don’t be afraid of seeing a mental health professional. “I would recommend that if it’s causing them to lose sleep, if they’re depressed, they need to see somebody,” Thornton says of transitioning athletes.

Some people who have a particularly hard time may even be dealing with an addiction, says Gardner. Runners, for example, may be worried about losing that runner’s high.

But, as with any loss, there is a light at the end of this grieving tunnel, as HeidiChristensen found after she first stopped competing.

In 2011, 25 years after quitting triathlons, Christensen finally got a diagnosis for what was causing that leg pain and weakness: she had blockages in arteries that supplied blood to her legs.

Turns out, this is a common condition in triathletes and bicyclists. But it was barely known when Christensen developed it.

Surgery repaired her arteries, but by that point, Christensen had missed a quarter of a century in her sport. However, she had gained achievements in a related sport: swimming.

How? Christensen learned to swim without using her legs. “A lot of women long-distance swimmers don’t use a lot of kick because it doesn’t really propel you that much for the total oxygen cost,” she says. “I mastered a really fast stroke.”

At 55, Christensen can now bike again thanks to that surgery. But she’s finding that she’s become more laid back about exercise. “I think I get more joy just from doing the activity than I used to,” she says. “I may not be as fast as I was, but I’m out there, and I’m doing it.”

“You’ve got to find a way to have fun doing whatever you’re capable of doing,” she says, “even if it’s taking the dogs for a walk for a few miles. Enjoy that as much as you can.”

Christensen is starting to have some leg pain and weakness again. But she’s trying to accept it gracefully. “Legs or no legs, I can always swim,” she says, looking on the bright side.

That’s a thread that runs through all these athletes’ tales: stay positive. Keep your head up. Keep moving. You never know where fulfillment might come from next.