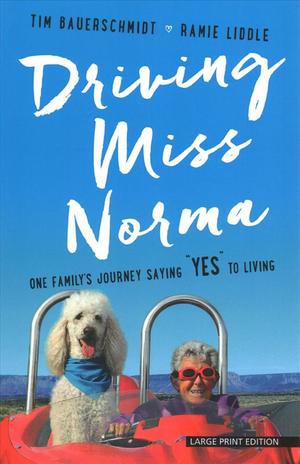 By Tim Bauerschmidt and Ramie Liddle – Harper One, 2017

Tim and his wife, Ramie, lived frugally and invested wisely in order to retire early. Then they left the rat race to live as nomads. They kept in touch with family infrequently; Tim visited his parents once a year and called them from the road. On their visit in 2015, Ramie and Tim arrived at his parents’ Michigan home in their RV to find his father, Leo, in pain, with his organs failing. He died shortly after he went into the hospital.

At the same time Leo was admitted to hospice, Norma, 90, learned she had uterine cancer. Even if she survived surgery, the prospects for recovery were unlikely. Sensing his mother was a poor candidate for a nursing home, and that living alone would be out of the question, Tim and Ramie asked Norma to consider joining them on the road—mobile assisted living, if you will. Norma said yes.

Like so many of us with aging parents, Tim and Ramie had often planned to have “the talk” about end-of-life wishes and what ifs, but it wasn’t something they were ever able to bring up. Now that his mother was going to join them, the couple purchased a more comfortable RV (second sleeping area, wide enough berth for easy mobility, two-and-a-half baths, washer and dryer).

Tim soon realized how little he knew Norma as an individual, away from his father’s shadow; to experience their relationship growing and deepening was heartwarming. What was her role in World War ll? Had his parents actually hoped to go hot-air ballooning one day? Had Norma really never been to the neighboring state? More than that, Norma became an unwitting celebrity when Ramie started a Facebook page of their experiences. Norma’s journey was featured on prime-time news stations around the United States.

Their story takes us 7,000 miles to national parks, campgrounds and quirky roadside tourist spots, sharing them from Norma’s vantage point of delight and awe. Norma is a trailblazer and an inspiration, who said no to possibly life-saving surgery and yes to life. At the end of Norma’s time with us, we’re left with a grateful appreciation for being allowed along for the ride. 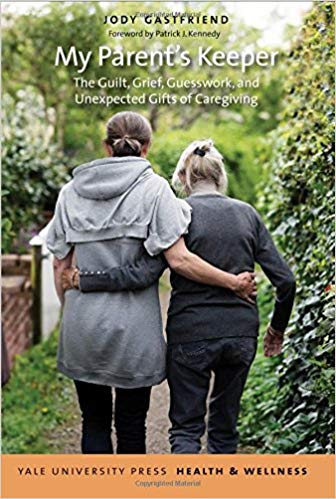 As we humans are living longer, the sandwich generation has moved to the club sandwich, as we care for not only parents and kids but grandparents and grandchildren, all at once. Is it any wonder we’re stressed out? Jody Gastfriend, social worker and vice president of senior care services at Care.com, designed a highly respected program for employers wanting to support staff who are caregivers. She also looked after her own father, who had Alzheimer’s. In this book, she delves into the challenges of caring for parents in declining health. Gastfriend leaves no possible situation unaddressed. She covers parents who refuse help and siblings who are unsupportive, along with the more practical basics of dementia care and of working with institutions and navigating social services and insurance claims. She considers the future of caregiving, which may involve technology and robotics. Pitfalls and rewards are covered in equal measure. Aging expert Ellen Goodman calls this book “the ultimate GPS for family caregivers.” You’ll want to have it in your library. 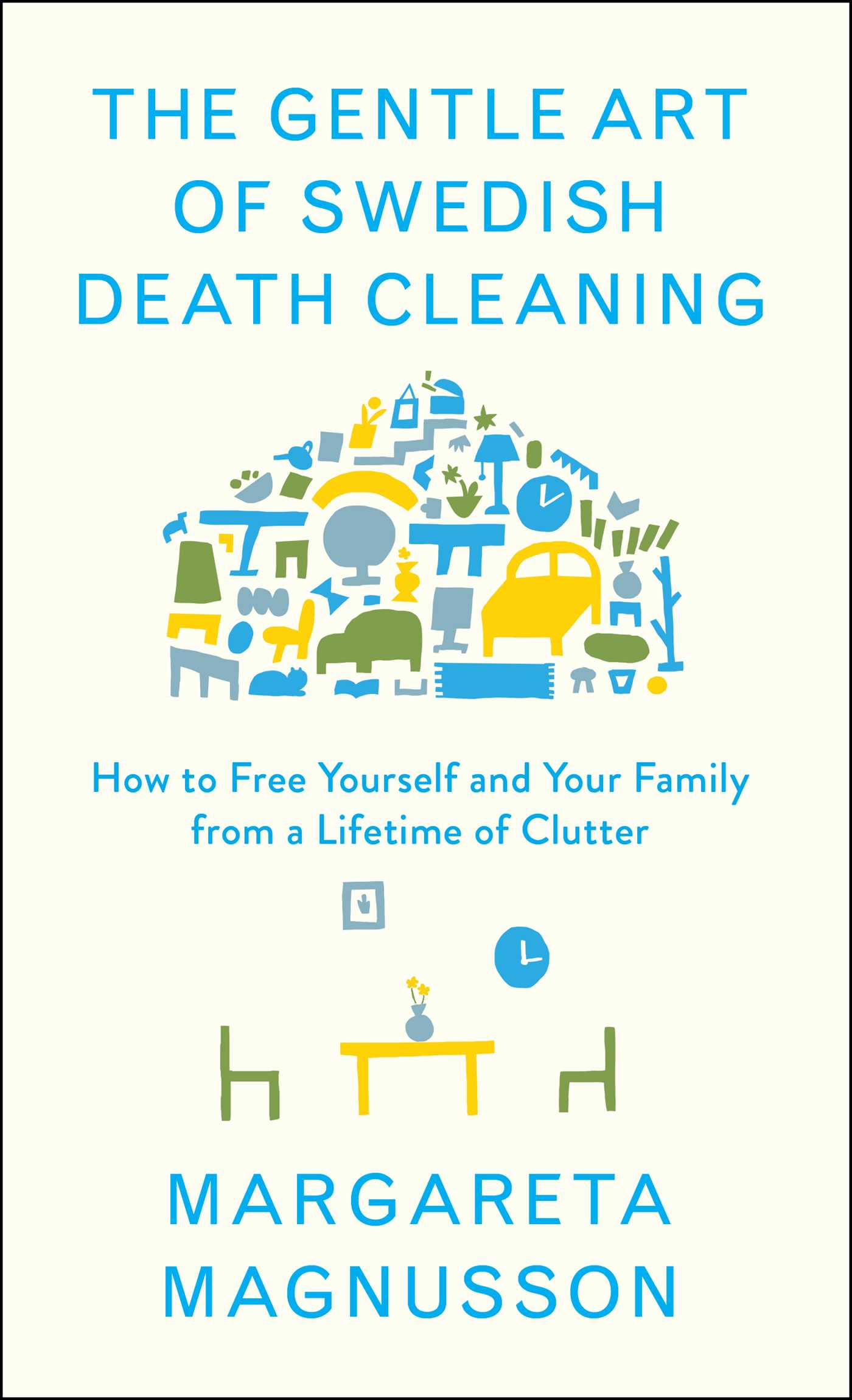 Sure, you’re a jolly good fellow, but if you’d like to be remembered as such, don’t leave a lifetime’s worth of junk—aka personal collections—for others to clean up when you die. Margareta Magnusson has firsthand experience in dealing with this type of dirty work, which the Swedes call döstädning, or death cleaning. Creepy name, liberating concept. She professes to be “between 80 and 100” and reveals some of what she’s kept and why, as well as the things she has let go, and how. She leaves nothing to the imagination, tackling everything from private matters in bedside drawers to what’s left on social media platforms. If you have attempted to pare down using a different book that promised a changed life but was just too harsh, Magnusson’s humor and practicality may be what you need. You don’t need to toss everything at once: her approach to death cleaning is that it’s a process that should be undertaken again and again as needs change. When the time comes, your family will thank you. 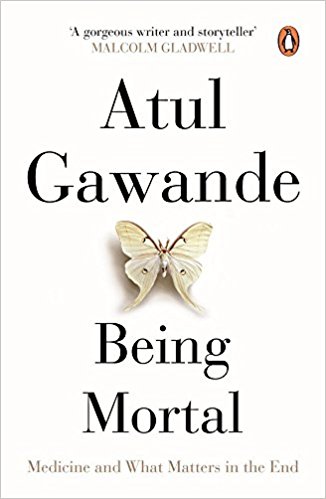 With increased longevity in the news, you don’t have to look hard to find a book about living better. But after watching his father’s death, physician Atul Gawande asks if we could be dying better. The advent of improved medicine and life-extending options means those who are terminally ill may die only after years of uncomfortable and expensive interventions—and without fulfilling their goals for the time remaining. Both in his medical practice and when his father became terminally ill, Gawande recognized how ingrained it is for physicians to try to fix and cure when what is needed is care and a listening caregiver. Now he wants us all to see what he sees, that everyone has desires, needs and goals, no matter how long they have left. Let’s listen. 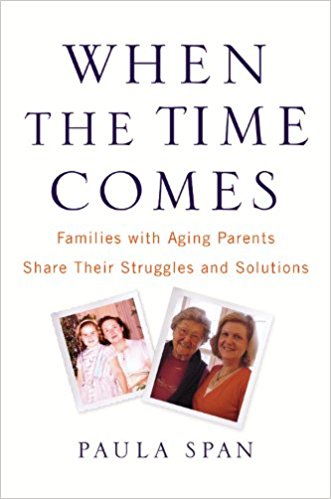 When older people develop health problems that make it risky to live alone, families have a number of options. Journalist Paula Span, who writes the “New Old Age” blog for the New York Times, explores five possibilities. She lays out the pros and cons of staying put with help from relatives or aides; moving in with adult children; moving to an assisted living facility; entering a nursing home; and getting hospice care.Span interviews families who chose each option and follows their progress as the older generation adjusts—successfully or not—to new circumstances. She provides thoughtful advice, points out common pitfalls and explains in detail what the different choices cost. Anyone who is, or may become, a caregiver will find a wealth of information and comfort here. 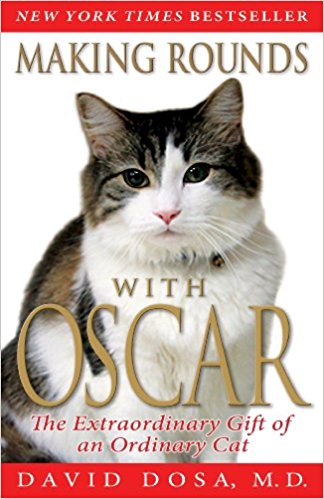 If you relish a true story that showcases the animal-human connection, you’ll want to meet Oscar, a cat with a unique ability to sense when a person is about to die. Oscar lives in the dementia unit of Steere House nursing home in Providence, RI, where we make the acquaintance of feline-averse David Dosa, MD, and his staff, patients and families. This is more than a cat tale, it is the coming-of-age story of Dosa, a compassionate but skeptical geriatrician who learns to trust this tabby cat, his nurses and his instincts, as he witnesses the comfort and acceptance that come with a visit from Oscar. With uncanny accuracy, Oscar jumps up and steadfastly remains on the beds of patients in their final hours. This is an insightful, warm and illuminating read about end-of-life choices and the unlikely friends who might be there to guide us. 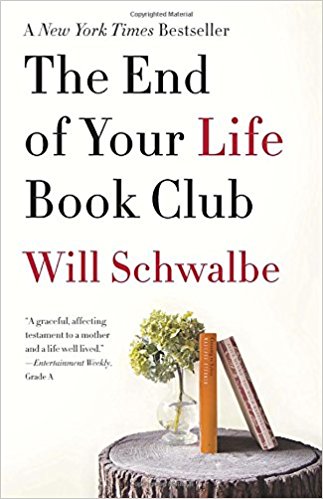 Don’t let the title of this inspirational tale fool you into thinking this is a book about death. There is nothing morbid about this memoir. This is a story of devotion—of a terminally ill woman to her many philanthropic pursuits, a son to his mother, and both mother and son to a shared love of books. Schwalbe is a publisher, a wordsmith and lover of literature. His mother is a fascinating humanitarian; one of her accomplishments was helping to build a library in Afghanistan. They were already close, and the mother-son bond only gets stronger as Mary Anne faces a diagnosis of stage IV pancreatic cancer. In doctors’ offices and at bedsides, together they enjoy the comfort that the printed word gives them, the joy of sharing books that have affected them over the years. This book club offers a double love story, a shared journey and a treasure trove of books to add to your own reading list. 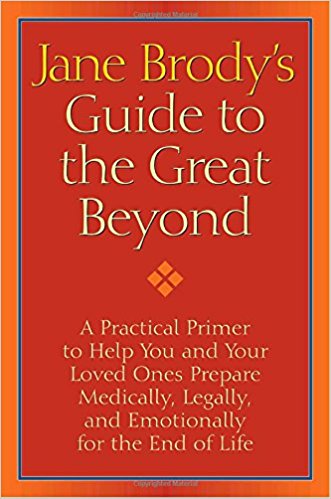 No matter what your age or health, this book by New York Times columnist Jane Brody is for you. With her frank, thorough approach to a subject we usually avoid, Brody helps us prepare for our own and our loved ones’ deaths. As she points out, planning for the end of life is a gift to your future self—and to your family—because it gives you more control over how you will die, and it spares them the anguish of not knowing what you would have wanted. This book offers practical insight on a wide range of topics: what kind of living will is least likely to be misinterpreted by doctors, how to avoid burnout when caring for someone seriously ill, stages and types of grief, what to say—and not to say—to a dying loved one or a bereaved friend, why some doctors abandon terminally ill patients. It also explores myths about organ donation. Humorous cartoons help lighten a serious topic. 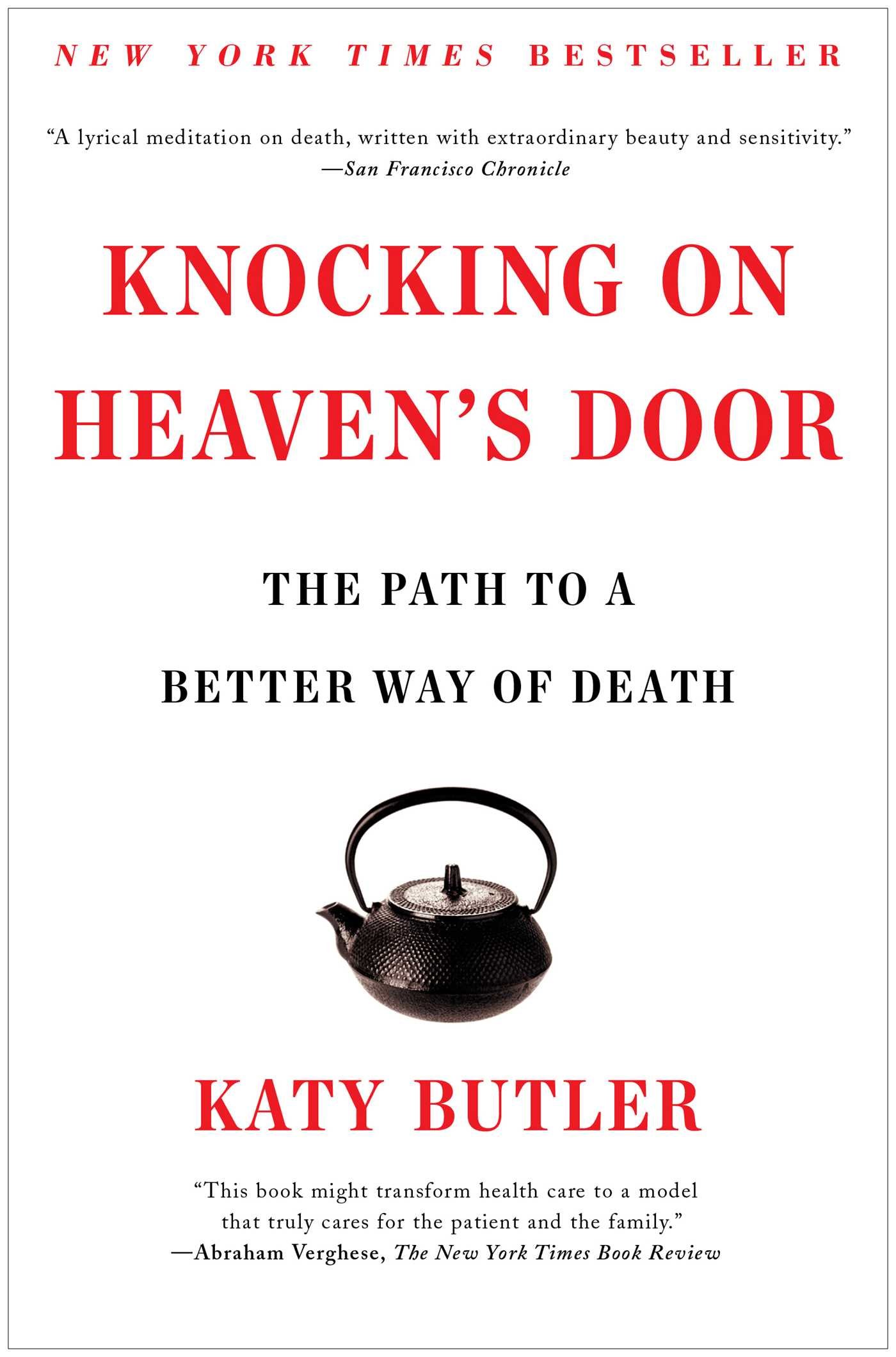 In this honest mix of memoir and research, Katy Butler shares her family’s experience of illness and death in hopes that we can reclaim caregiving and dying from a broken health system. Butler’s father, Jeffrey, a World War II survivor and academic, suffers a massive stroke, followed by a pacemaker implantation—a hasty decision that will haunt the family for five years as his descent into dementia takes a devastating toll on Butler’s mother’s health. Butler lives across the country and finds herself part of the “roll-aboard generation” of adult children who spend years caregiving via plane and phone. When doctors deny her request to turn off the pacemaker, Butler struggles to navigate a health system designed around reimbursement and life-saving measures rather than quality of life and patient-centered care. An instruction manual for creating a good death, Heaven’s Door deserves serious attention not only from each of us but the entire US medical community. 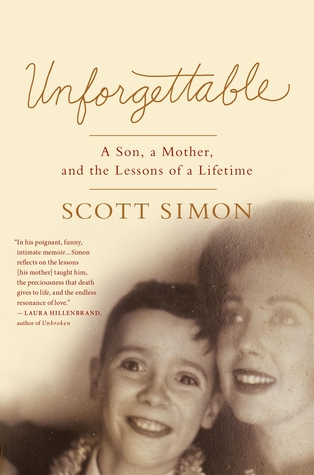 National Public Radio’s “Weekend Edition Saturday” host Scott Simon made headlines in 2013 with his tweets from his dying mother’s ICU bedside, taking followers along for this most intimate journey. Patricia Simon Newman, a glamorous, mischievous and resourceful woman, made the most of life’s challenges and found good in every person she met. And what a cast of characters that was. She married three times and had many loyal friends as she raised her only son. Simon’s tweets ignited debate over whether or not such a personal moment should be shared on social media (most followers were both moved and supportive, while others were outraged), but the book draws us into the saga of a son’s devotion and a family’s shared memories. The memoir takes place between the tweets, unique and universal at the same time. Simon’s homage to his remarkable mother is a warm and life-affirming read. 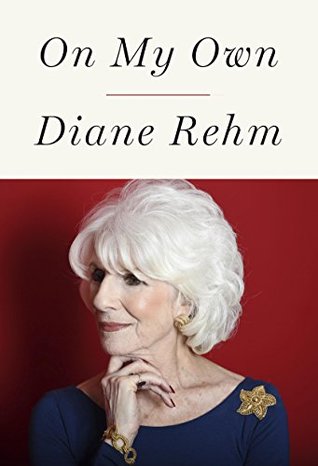 For more than 30 years, Diane Rehm, who is now 79, has been the gravelly voice (due to a condition called spasmodic dysphonia) of the “Diane Rehm Show” on National Public Radio. Syndicated across the United States, the two-hour news magazine focuses on politics and current affairs. But it’s Rehm’s private affairs that are the topic of this memoir, as she beautifully chronicles her husband’s passing, how she copes and what might lie ahead. Diane and John had been married 54 years when Parkinson’s disease left them with no place to turn when he asked for medical help to end his life. Rehm writes about the agonizing realization that John would have to starve himself. She shares her despair about his decision and her first year of widowhood—and anguishes about who will care for her when her time comes. Once she retires in 2017, Rehm promises she will spend her days advocating for the right-to-die movement.