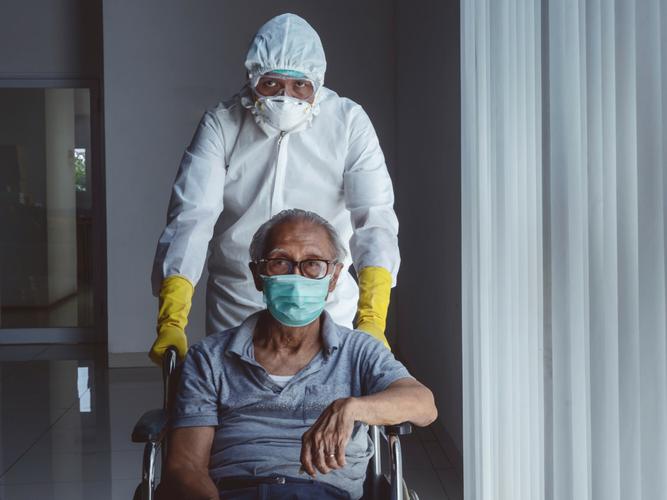 In a powerful interview, the distinguished scholar and author Margaret Morganroth Gullette exposes ageism’s reach into the highest levels of government and its lethal consequences during the pandemic, She draws on research she has done for her work in progress, American Eldercide, which will be published by the University of Chicago Press. Her interview was posted on the website of the Radcliffe Institute for Advanced Study at Harvard on September 1, 2022. Gullette sometimes blogs for the Silver Century Foundation.

Margaret Morganroth Gullette … is one of the nation’s leading voices on the negative impacts and violence of ageism. Gullette, 81 and a resident scholar at the Women’s Studies Research Center of Brandeis University, is the author of Ending Ageism, or How Not to Shoot Old People (2017), which won the MLA [Modern Language Association] Prize for Independent Scholars, and the Society for the Psychology of Women’s Florence L. Denmark Award for Contributions to Women and Aging. One of her oft-repeated refrains is “Fear ageism, not aging.” … [S]he is working on her next book, American Eldercide.

What is ageism? And why is it so important now?

We need to consider the immense power of ageism. I’ll start with just two aspects. People internalize the stereotypes of decline—the decline attributes that America culture associates with growing older—and this involves warding off their own personal bodily or economic decline. Another type is behavioral, and that means hating or shunning older people. These two types can be distinct.

You believe Donald Trump’s presidency resulted in abandoning the residents of nursing homes, and that COVID played a large role in increasing the stigmas around growing old in America. Can you elaborate?

Yes, Trump’s ageism was lethal. He exemplified both types. He is a typical idolater of youth, including, of course, his own lost youth. He has fake blonde hair, the fake tan. Youth emulation drives significant behaviors. He owned the Miss America Pageant for years, he remarried younger women, he fathered a child at age 60, and he spoke with boisterous bluster of his sexual assaults on Access Hollywood. Experts told him that the young were dying of COVID too, but he said, “Ah, they have a helluva immune system.”

And as president, he was an ageist in this other sense, in shunning older people. He had a chain in his mind linking dementia and disability and expendability and old people. In 2020, everyone knew the residents of nursing homes and older adults had been dying in appalling numbers. He literally did not count them. At the end of August 2020, the Centers for Disease Control and Prevention [CDC] was estimating that nearly 200,000 people had died, and he retweeted a claim that the deaths due to COVID were really only 9,000, since “most of the deaths are very old Americans with comorbidities.”

Politics, of course, required that he minimize the numbers because he chose to minimize the pandemic, but only ageism and ableism decided whom he would count. This is more important than everyday ageism—yours or mine—because he had power at the top of the political hierarchy to dissociate himself from the nursing home residents.

More could have been saved had the Centers for Medicare & Medicaid Services [CMS] immediately provided tests and PPE [personal protective equipment] and monitored the staffing ratios, thus keeping residents safe and out of the overwhelmed ICUs [intensive care units]. So ageism rather than incompetence or any other reason that has been ascribed to Trump can explain why his first policy decision about COVID was to do nothing for nursing home residents. That was disastrous.

Why does ageism matter now, as COVID wanes?

It matters because we have seen it at the highest levels of government, we have seen it in many state governments’ responses to COVID, and we saw it in the triage guidelines adopted early on by hospitals, many of which used age to exclude people from access to ventilators.

Ageism, the ageisms plural, really, causes a spectrum of damages—including internalized shame and job discrimination at early ages.… And “compound ageism,” as I call it, is what some people felt toward nursing facility residents. A particular form of intersectionality. It was a compound of they’re old, they’re sick, they’re poor, they’re women, they have cognitive impairments, they have mental health issues. Compound ageism is a very toxic prejudice.

To be fair, people who are ageist aren’t necessarily also ableist, classist, racist, sexist, et cetera. They have overcome some of the other biases. And I keep in my heart families who lost loved ones in the facilities. They were heartbroken—separated from them by the lockdowns. Unable to have real funerals. A million mourners know their relatives could have lived longer, should have survived.

But in general, Americans seem to be responding to the plight of those residents with indifference, if not alienation.

The early part of the COVID Era was terrifying—I mean, it terrified the CDC. It should have terrified CMS, which is responsible for the residents. It terrified the doctors in the hospitals. It terrified people in rural communities, where half of the hospitals had no ICUs, and it terrified normal people, some more than others. People had a lot to focus on in their own personal lives: worry about their children, their parents, their jobs. Social cohesion weakened; those anxieties grew. People have a tendency to back away from more trouble, more sorrow, more misery. They protect themselves. And psychoanalysis says we protect ourselves from aging and dying. A lack of empathy makes ageism harder to fight even as COVID waxes and wanes.

Why does it make it harder to fight?

You catch me at a discouraged moment. I’ve been active in a group, Dignity Alliance Massachusetts. They’re wonderful people: they’re dedicated, they’ve been in this for two years. They supported 67 bills in the state legislature for people with disabilities and those who will need long term care. And the legislature went off and ended their session without dealing with a lot of things, including nursing homes. Despite the scandals in this state, they left without passing a nursing facility reform bill. In the national media, there was some coverage, but it didn’t amount to a campaign, “Old Lives Matter.” So this is not encouraging.

This is the year to fight back against the causes of all those premature deaths—170,000 is one figure—in nursing homes. We know a lot about what happened. We know that 70 percent of 15,400 US nursing home facilities are owned by for-profit organizations, and some by hedge funds. Evidence shows they care more about the bottom line than about the health and well-being of their residents. There was understaffing and neglect, and people died. Much understaffing was not because aides fell ill—they could have been protected too—it was unnecessary. Actually, you catch me at a pitch of anger at the debased culture of feeling in this country. Anger is at least better than discouragement.

I hold on to the belief that many good, caring people will function in higher gear now. My own field, age studies, and gerontology are exposing the evils. We have an age-friendly cities movement; we have not just AARP but nonprofits like Justice in Aging and the disability rights organizations. That’s where the action is. You have got to go to the law to fight some of these things, particularly if legislators will not do their job. We already have laws on the books. One of the candidates for state attorney general said she was going to look at all the age-related regulations in Massachusetts; update and monitor them; and go to court, if need be, to rectify injustices.

I like the term “age justice.” There’s more reason to get on board with it now. Age is not a trivial categorization. Ageism is serious—as serious as sexism, as serious as racism. In the minds of people of conscience and in the behaviors of people of conscience, it should rank with those. Indeed, it could matter more, because it is a prejudice that targets anyone lucky enough to grow old.

Mac Daniel is the associate director of communications and senior editor of the Harvard Radcliffe Institute for Advanced Study.