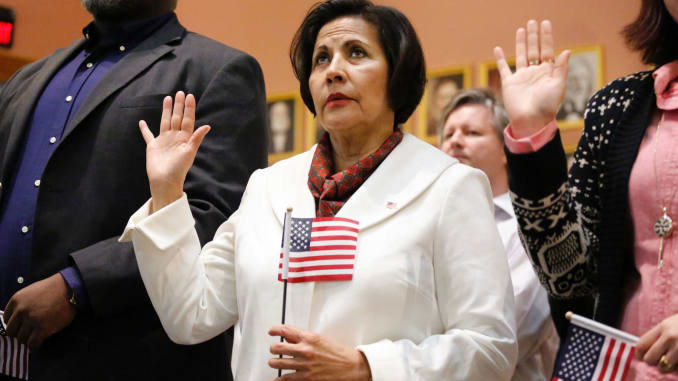 Digging into the possibilities opened up by this controversial new federal regulation, journalist Jaya Padmanbhan explores what it will mean to some immigrants and their families. This article originally appeared on the PBS Next Avenue website on Feb. 24, 2020.  Silver Century posts it with the permission of Next Avenue and the author.

Devyani Dave immigrated from India to California in 1995 in her early 60s to live near her son and his family. Her green card was sponsored by her son (who prefers not to reveal his name), a citizen who came to the United States in 1973. When Dave arrived to start her new life, she had no health insurance and relied on her son to support her. Now, sitting on a bench at Priya Living, a senior-community facility in Santa Clara, CA, Dave said she feels fortunate to be in close proximity to her only child, especially as she ages.

But some immigration experts say the Trump administration’s new public charge rule, [which was put] into effect by the US Citizenship and Immigration Services on February 24, 2020, nationwide, will no longer welcome people in similar circumstances [to] Dave’s. That’s because, the analysts say, it will deem them likely to become liabilities for America.

How the Public Charge Test Has Changed

Since 1999, federal immigration law has had a public charge test in place to deny people admission to the United States if the government identifies them as ones who may be “primarily dependent” on the government for support, either through cash-assistance programs or long term institutional care.

But the Trump administration is altering the definition of “public charge.” Under the new rule, any person who uses designated benefits for 12 months in any 36-month period might be considered a public charge. And the list of benefits has expanded to include Medicaid, the Supplemental Nutrition Assistance Program (SNAP, formerly known as Food Stamps) and Section 8 housing assistance.

It’s nearly impossible for older immigrants to pass the “totality of circumstances” test.

A public-charge determination will be made, at the time of applying for a green card or admission at the US border, by an immigration officer after considering a “totality of circumstances,” a discretionary weighting system [that looks] at factors including age, health, family status, assets, education and skills.

Who Is Likely to Be Most Affected?

Kean and other immigrant analysts say the revised public charge rule will tilt negatively for immigrants with chronic health conditions or disabilities; those who are not fluent in English; and those earning less than 125 percent of the federal poverty limit—that’s $21,138 for a two-person household.

With these stringent benchmarks, the new rule could have an outsize impact on low-income, older immigrants of color, preventing some from becoming legal permanent residents in the country they live in or aspire to live in.

This will have “a ripple effect on their families who are here in the United States, as well as our communities in general,” said Kean.

When the Supreme Court ruled on January 27, 2020, to give the Trump administration the go-ahead for its public charge rule, a statement from the White House press secretary called the decision “a massive win for American taxpayers, American workers and the American Constitution.”

In a fact sheet promoting the new public charge rule, the White House cited a 2017 poll from America First Policies (a pro-Trump organization), saying that 73 percent of Americans favor requiring immigrants coming to the country to be self-sufficient.

Critics of the new public charge rule, however, say older, poorer immigrants will be harmed by it. In an amicus brief filed by Justice in Aging and others to contest the new rule, one of the arguments points to the situation of five million older immigrants who “are likely to have supported their families, have contributed to our nation’s economy by, for example, paying taxes and contributing to Social Security, and have been integrated into the fabric of our country. Yet, under the Final Rule, they will be viewed as having failed to contribute to society.”

How Immigrants Are Reacting

“That’s not fair!” exclaimed Losa Petela, a 60-year-old, legal immigrant from the South Pacific archipelago of Tonga, who lives in Fremont, CA, and has worked as a home caregiver in the Bay Area for nearly 10 years. Citing her own example, Petela said that immigrants who’ve served their US community well, even if they are older, should be allowed to get their green cards.

Praveen Thakur, 79, a US citizen who came here over 50 years ago from India and lives in Santa Clara, CA, takes a slightly different view. “If the children take full responsibility [for their parents], then older parents should be allowed to come and get a green card so that they can stay with their families,” he said.

Dave makes another distinction: “Those whose children are contributing to the [United States] for so many years and who don’t have anyone left in India should be allowed to join their families,” she said.

Fears about the implications of the new public charge rule are spreading.

“We know that health care providers and social service agencies across the country are already starting to get calls from concerned individuals, asking whether or not it is safe to remain enrolled in health, housing and nutrition programs,” said Madison Allen, senior policy attorney from the Center for Law and Social Policy, a nonpartisan nonprofit working on policy solutions for low-income people.

This chilling effect, caused by confusion as to who or what will be subject to the public charge test, has resulted in some legal immigrants disenrolling from public programs even before the February 24, 2020, official start date.

The New York City Department of Social Services has said that in 2018, roughly 11 percent of the city’s noncitizen immigrants who are eligible for and lawfully receiving SNAP benefits have either left the SNAP caseload or have decided not to enroll, at a higher rate than US citizens in the program. The agency cited a correlation between this decline in enrollment and the public charge proposals, due to a “fear of potential immigration consequences.”

Opposition to the Rule Change

Congresswoman Judy Chu, a Democrat representing communities near Los Angeles, said at a Jan. 31, 2020, press briefing, “By keeping families apart, Trump is making it harder on immigrants to succeed.” Last year, Chu introduced the No Public Funds for Public Charge Act, which would prevent federal funds from being used to implement the new public charge rule. The bill has 118 Democrat cosponsors from 34 states and no Republicans.

“We are in a wait-and-see period right now,” said Denny Chan, a senior staff attorney at Justice in Aging. Arguing that the new public charge rule unlawfully targets older immigrants and their families, five briefs have been filed in circuit courts by organizations advocating for the elderly.

“It’s going to be a lengthy process,” Chan said….

Older immigrants who are worried about the public charge rule, Chan said, should “speak to an immigration attorney to get individualized legal assistance before they make any decision to access, or apply for, benefits.”

Silver Century Foundation: The change in the public charge rule went into effect in late February, 2020, just as the coronavirus epidemic was exploding across the country. Since then, the US Citizenship and Immigration Services has agreed not to use the new rule to deny visas or green cards to immigrants who are tested or treated for COVID-19.  Advocacy groups say, however, that immigrants are still avoiding medical care because of fear and confusion.

Jaya Padmanabhan is a journalist, essayist and fiction writer. Her award-winning immigration column appears in the San Francisco Examiner, and she has also written for India Currents, Forbes, Next Avenue and other publications. In 2019, she was awarded a Journalists in Aging fellowship by the Gerontological Association of America and the Journalists Network on Generations. The Silver Century Foundation helps to support these fellowships.